The strategies of Indoor Cricket?

The secret about successful strategies in indoor cricket is . . . there's not really a secret.

Indoor cricket is not a complicated game.

Not too difficult to grasp.

To achieve these aims, there are some basic, almost universal strategies. I say "almost" universal because there are always going to be some opponents who require something a little different, but for the time being we'll stick to what should serve you well in 99% of cases.

The basic strategy when batting is to try to score at least one or two runs for every ball faced. This does not mean you never hit 3s, 4s, 5s or 6s - it means you don't go into an innings thinking that's what you have to do to get a good score. If a ball is bowled that you know you can smack to the back net, then by all means do so - but keep in mind the first imperative ....

The First Imperative when batting is to not lose a wicket. When you do lose a wicket (as you almost certainly will), the Second Imperative comes into play - and that is not losing another. And so on.

Many players seem to panic when they lose a wicket, and try to recover the lost runs by trying to hit the back net off the very next ball. A much more successful strategy is to work even harder at not losing another wicket, and continuing to strive for the 1 or 2 runs per ball.

The absolute minimum a batting side should be aiming for is 100. That's only 25 per pair, which is virtually 1 run per ball faced. That means every 2 or more scored is a bonus. A score of 100 should win more often than lose.

The majority of runs scored in indoor cricket are 1s and 2s. A safe 2 is usually a better option than unnecessarily going for a high-risk 6, unless of course you are chasing a huge score. Chasing huge scores may mean you have to try to hit the back net often .... but consider this: a score of 2 off every ball faced gives a batting pair a score of 48. And there are 4 batting pairs. How big does a score have to be before it is out of reach of a team hitting 2's and not losing wickets?

A final final word . . . there are three other aspects of batting I've not yet touched on, but are very important: backing up, running, and shot-selection.

a) Backing up. Some batsmen, when at the non-striker's end and awaiting the bowler to bowl, will stand well outside the non-striker's line, reaching back so the tip of their bat is just over the line. There are three main disadvantages to this strategy.

Firstly, the batsman is stationary. As the bowler releases the ball, the non-striker has to begin moving from standing still. More on that in a minute.

Secondly, the tip of the bat is just over the line. The slightest movement toward the batsman on strike and the non-striker's bat will slip over and outside the line, making for an easy Mankad (and yes, as long as the Mankad is a legal form of dismissal, ALL batsmen should take steps to avoid falling victim to it). 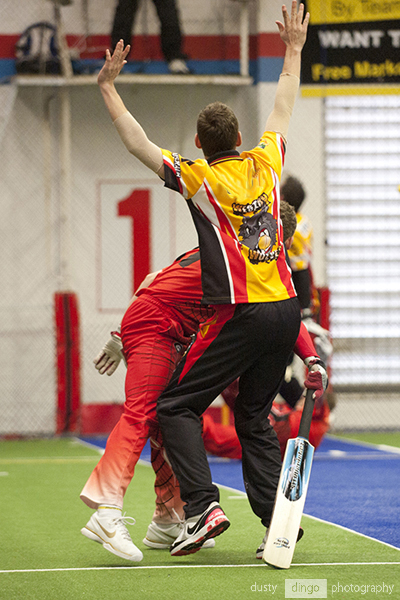 In my experience, the non-striking batsman is best served by beginning to walk toward the batsman on strike as the bowler approaches his delivery stride. As the bowler is releasing the ball, the non-striker is crossing the non-striker's line . . . but his bat is still well behind the line. If a Mankad is attempted, there is enough latitude in the non-striker's position to allow him to stop in time. But the main advantage is, the non-striker is moving as the ball is released, and it's easier and quicker to hit top speed from a walk or slow jog than it is from standing still, reaching back in the opposite direction to where you are about to run.

b) Running. Some batsmen run down and very close to the side net. In my experience, this is the worst possible line, for one reason: I have seen countless instances of a batsman's run being stopped as he was wedged between the net and a fielder. It is very, very easy for a fielder, in the act of fielding, to quite "innocently" close the gap between himself and the net, thereby blocking the passage of the batsman. Far better to run a couple of meters off the net, usually down the side of the front half where there is only one fielder (usually the leg side), so less fielders to "innocently" collide with. And running down this line helps make "traffic" in the front half, almost exclusively to the batsmen's advantage.

c) Shot Selection. Despite its similarities to outdoor cricket, when it comes to shot selection (choosing what type of shot to play) there are some major differences.

For example, in outdoor cricket, the straight drive is a classic, high return shot. In Indoor Cricket, it is a very risky shot by way of the ball traveling very quickly to the back-stumper, giving her/him a high probability of running out one of the batsmen.

Even a scorching on- or off-drive can be very risky: depending on the angle of the ball off the side net, it could simply direct the ball very close to that lurking back-stumper, again increasing the chances of a run-out at the non-striker's end.

And a lofted on-drive or lofted off-drive is a prime candidate for a catch off the side net by one of the back-half fielders (or even the following-through bowler).

Which leads us to the final word on shot-selection . . . the safest and most effective shot in indoor cricket is the "down and up" shot. This is when the batsman hits the ball down into the ground, at such an angle that it then bounces over the fieldsmen and into the net very high up. This is most easily played off any ball pitched outside the off-stump, especially if it is pitched a little wide of the off-stump and on or about what would be considered a good length in outdoor cricket. This shot can also be played to the "on" side, particularly to a ball pitched closer to the batsman and again, pitched on or about a good length for outdoor cricket.

. . . which leads to a little tip for bowlers (expanded later in the Bowling section) . . . just short of a length, digging up into the batsman's  hip or lower ribs, is the general way to counter the down-and-up shot, and hopefully lead to a fend-off to one of the close-in fielders leading to a run out.